Watching the transit of Venus

08 Jun Watching the transit of Venus

This week I went with my husband to watch the Transit of Venus from the Sydney Observatory. I bought tickets on a whim a few months ago when I was reading about how unique the transit is and its astronomical and astrological significance. A quick rundown for those who aren’t stargazers…

Venus Transits happen in pairs, eight years apart. The last was in 2004 and the next won’t be until 2117. It has particular relevance to Australia’s history as James Cook’s expedition to chart the 1769 transit led to him being the first known European to land on the east coast.

Venus is associated with beauty, artistic endeavours, love (obviously), harmony, nature, the divine feminine and a whole host of other extraordinary attributes such as the golden mean, and the Fibonacci sequence. There are lots of fascinating mystic theories out there for those interested….

Anyway, as many of you will know, in southeast and coastal Australia, we’ve had some very wild weather this week. The night before the transit was stormy and I woke several times wondering if our roof would survive… or if we would get flooded (again).

And then, would we actually see the transit?

On 6th June, the weather was inclement, but not raining. We went along to the Observatory, bought our orange eclipse glasses and then stood in line with everyone else, waiting for the clouds to pass so we could view the sun. We were lucky. We saw the transit through several telescopes, including the largest instrument in the domed roof of the Observatory, which was built especially for the 1874 transit. Venus appeared like a small black dot moving across the face of the sun. It was thrilling to see.

So how does all this relate to writing?

I often reflect on how long creative endeavours can take to complete. How long you have to keep your original intention alive—and nurture it, and cherish it. How much patience and persistence is needed. How you have to weather the storms to see that single shaft of sunlight. How good it feels when you are rewarded for your patience.

Often you have to take a huge leap of faith. Then, along the way, keep reminding yourself that you are a creative being and do whatever it takes to hold on to your original vision. Pray, dance, meditate, walk in nature, do yoga, bake cakes, weed the garden, listen to music, have coffee with friends… Whatever you need to believe in yourself and stoke your own creative spark.

Again, I revert back to one of my favourite quotes by Ben Okri (Birds of Heaven). It helped complete my last book and is still as potent with my current project. I hope it ignites something in you! 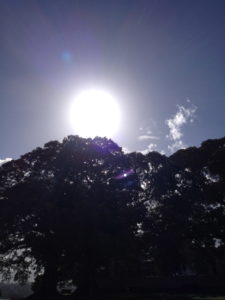 ‘A true story-teller suffers the chaos and the madness, the nightmare—resolves it all, sees clearly, and guides you surely through the fragmentation and shifting world…. Creativity is a form of prayer, and the expression of a profound gratitude for being alive.’