I’m Claire Scobie, award-winning author of Last Seen in Lhasa and The Pagoda Tree, and co-author of a new memoir, A Baboon in the Bedroom, which I wrote with my mum, Patricia Scobie. I’ve lived and worked in the UK, India and now Sydney.

For 10 years I’ve run creative writing workshops across Australia and Asia. I’m a regular presenter at the Australian Writers’ Centre, the country’s largest community of online and classroom courses, and mentor a limited number of writers.

Through my consultancy, Wordstruck, I advise companies and leaders on how to harness the power of storytelling as a strategic business tool. I’m also a Partner with Anecdote and present Storytelling for Leaders workshops.

As a journalist for 20 years, I’ve written for numerous publications, including London’s Daily Telegraph, Destinasian, Observer and I contribute to the Sydney Morning Herald. After studying history at Cambridge University, I started my career at the Telegraph Magazine, winning a national award as Best Young Woman Journalist of the Year in 1997.

My travel memoir Last Seen in Lhasa, about my 7 journeys to Tibet & friendship with a wandering Tibetan nun, won the 2007 Dolman Best Travel Book Award and is now considered a travel memoir classic. I’ve been a member of the British Guild of Travel Writers since 2008, appeared as a panelist on ABC TV’s First Tuesday Book Club and I’m a regular guest at international writers’ festivals.

In 2013, I completed a Doctor of Creative Arts at the University of Western Sydney, so officially I am now Doctor Claire…

I’ve always loved travelling. It’s a gene I inherited from my parents who drove from London to Cape Town. This is such a good story that mum and I are indie publishing it ourselves as A Baboon in the Bedroom: Across Africa in a Land Rover called Stan. It will be available for general release in September 2017. I’m also working on my second novel.

If you need an Official Biography… here it is 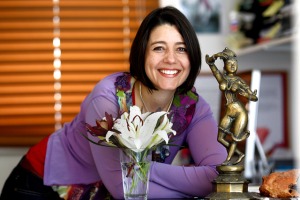 Please use this photo for publicity purposes

Claire Scobie is an award-winning British journalist and author who has lived and worked in the UK, India and Australia. Her travel memoir, Last Seen in Lhasa, won the 2007 Dolman Best Travel Book Award. In 2017, a new memoir, A Baboon in the Bedroom, co-authored with her mother Patricia Scobie, is being released. She has written for numerous publications, including the Daily Telegraph and the Observer. Through her consultancy, Wordstruck, Claire advises companies and leaders on how to harness the power of storytelling as a strategic business tool. She runs writing courses in Australia, Asia and the UK, and mentors writers one-on-one. In 2013, she completed a Doctorate of Creative Arts at Western Sydney University. The Pagoda Tree is her first novel.