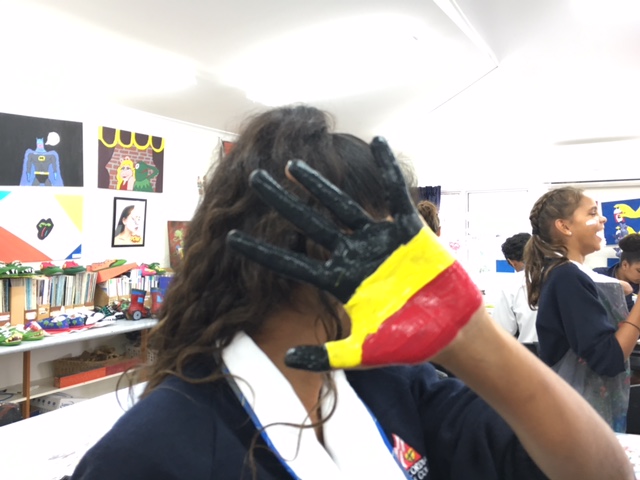 Lots of people said nice things to me at my London book launch but the nicest thing had nothing to do with my book.

Jane Smith, a librarian from Concordia Lutheran College in Toowoomba, Australia, happened to be in London that night so I asked her to come along. I’d met Jane back in May when I went to Concordia as part of a team with the Indigenous Literacy Foundation (ILF) to create a book with 12 Indigenous students in three days. I know… what a great challenge!

I was there with Indigenous writer and poet, Kristine Ellis and editor, Kathy Mossop. This was a first time for all of us: workshop facilitators and students. I was nervous and so were they.

How to create a safe space

The first day, understandably, the students were wary. They rocked up in their own time, headphones on, proverbial hand up. As a way to get the students thinking about their story, I used some short videos from Pixar. I wanted to encourage the students to think about themselves and see their stories as important — as important as some of the movies they might have seen like Monsters Inc. or Toy Story (both of which Pixar use in their videos).

It soon became obvious that trying to encourage the students to share their thoughts in the whole group was too confronting. We broke into smaller groups; I paired some of the younger students up with the older ones; I gave one of the older boys an art project because he was a gifted artist and more comfortable with paint than with a pen.

As a way to get closer to the character, I encouraged them to move like Jaz, talk like Jaz, think like Jaz. I asked questions like: how would she flick her hair? What exact skin tone was she — which the students all discussed in precise (and beautiful) detail:

Sometimes, I felt like I was getting nowhere. The students disengaged. After lunch was particularly hard: eyes closed, headphones back on.

Some things really worked: the art class where they were painting each other as much as the paper became a colourful expression of self identity. One group of Year 10 & 11 girls painted themselves with elegant dots, like they were making ready for ceremony. The younger girls covered their hands with red, black and yellow: the colours of the Aboriginal flag. Some of this artwork went into the final book and indeed became the cover.

One-to-one sessions with some of the older students also worked.

Before starting, Jane, the librarian, told me that the teachers were worried about one of the older boys. Let’s call him, Kieran. ’He doesn’t engage during lessons,’ Jane said. ‘He’s shut down and we don’t know why.’

I sat with Kieran and while he half-played a game on his phone, he and I workshopped the home life of Jaz. We imagined what her house would look like and the photos in her living room. His words, like with all the students, found their way into the final story. In fact, every student is named in Jaz’s story: they appear as her friends, cousins, uncle and teachers. Everyone’s voice is in there. 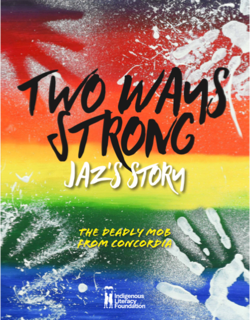 Somehow we managed to pull enough material so that by the final afternoon, we had a very rough first draft of the book. By this time, the students were waiting for us to arrive. In fact, after lunch on the third day, they were queuing up outside the library ready for a read through.

Six weeks later the book was edited, typeset and designed.

And today — 6 September, National Indigenous Literacy Day — I will be seeing the ‘Deadly Mob from Concordia’ as they called themselves — in Brisbane. Hon Quentin Bryce, the patron of ILF, is launching their book, Two Ways Strong, at the Brisbane Writers’ Festival, some of the students will read extracts and I’ll be there to cheer them on.

How stories can transform

When you run a project like this, you often don’t know the impact. I learned more in those three days than I have done in recent years at other workshops. The students themselves taught me so much — their humour, their drive, their ideas. The way they manage to straddle two very different worlds: a remote, often impoverished community and a formal boarding school. And yet, their ability to maintain their culture, their lingo, their sense of connection to family and to each other.

When I saw Jane at my book launch, the first thing she said to me — the thing that brought a lump to my throat: ‘Kieran is so different since the workshop,’ she said. ‘He’s smiling again, he’s back into his school work. He even comes to the library now.’

I know that the workshop was only one of the things that helped Kieran. It had come at the right time for him,  he’d also picked up an old hobby and started painting again.

Certainly, it came at the right time for me. It reminded me why stories matter, why we need to create a safe space for those stories to be shared and why the simple act of listening is so powerful.

Over to you: what stories matter in your life? P.S How you can be part of Indigenous Literacy Day:

The Great Book Swap is a fantastic way to celebrate reading locally, and raise much-needed funds for remote communities. Schools, workplaces, book clubs and all kinds of organisations can host one. The idea is to swap a favourite book in exchange for another, for a gold coin donation.

They hope that you will register for Indigenous Literacy Day – Wednesday 6 September, and be part of the national event. Other great times to hold a Great Book Swap are during NAIDOC week, National Reconciliation Week, Children’s Book Week, or National Literacy and Numeracy Week.

4 responses to “Stories that matter”