How to write about other cultures - Claire Scobie
16632
post-template-default,single,single-post,postid-16632,single-format-standard,ajax_updown_fade,page_not_loaded,,qode-theme-ver-10.0,wpb-js-composer js-comp-ver-4.12.1,vc_responsive

How to write about other cultures

25 Jul How to write about other cultures

In a recent video interview with the Australian Writers’ Centre I was asked how I write about other cultures. The pitfalls, the pleasures. And how writing about my Indian characters in The Pagoda Tree differed from writing about Ani, the Tibetan nun, in Last Seen in Lhasa.

It’s an interesting issue. In travel memoir writers often face the dilemma of how to write about ‘the other’ without sounding awestruck / judgemental / baffled or rude.

In the eighties PJ O’Rourke wrote Holidays in Hell. Re-reading it now and you can’t help but wince – even if he does lampoon himself.

‘We Yanks, with our hula shirts and funny Kodaks, are no longer in the fore. The earth’s travel destinations are jam-full of littering Venezuealans, peevish Swiss, smelly Norwegian backpackers yodelling in restaurant booths, Saudi Arabia businessmen getting their dresses caught in revolving doors … At least we American tourists understand English when it’s spoken loudly and clearly enough. Australians don’t.’ 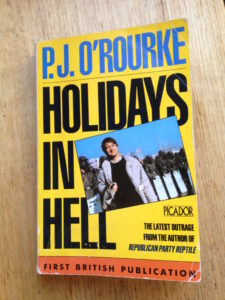 These days I don’t think O’Rourke would get away with it. There was a time when travel writers could make jokes about the strange ‘foreigners’ they encountered and readers enjoyed that. Not so, these days. It’s seen as offensive (as it often is). The best way to get a laugh is to laugh at yourself first, before you poke fun at someone else.

When I was writing about my nun friend, Ani, I wanted her to be as authentic as possible. I wanted my depiction of her to be accurate and respectful. When Ani told me that she still prayed regularly to be reborn as a man – a typical Tibetan Buddhist desire as men are seen to have better karma and an easier life – I was shocked. My Western feminism kicked in. But I realised that I was putting my own value judgements on her belief system.

Writing fiction requires another approach. With my main character Maya, a young temple dancer, living in eighteenth-century southern India, I had to get to know her on the page. I couldn’t base her on a ‘real’ relationship. That process of developing her character helped me grapple with some of the cultural differences between my world and hers.

As I explained in my extended interview, I didn’t want to shy away from the hard stuff when writing The Pagoda Tree. Some of the cultural practices that these temple women experienced – particularly the initiation ceremony which branded the young girls, marrying them to the god Shiva – may shock us today. But in order to write the novel from within that period and setting, I needed to lay aside my own views. In that way, the reader could decide what they think.

So how do you write about other cultures?